"Brilliant"   "Cleverly made"   "Incredibly well-thought out"  →  Read what people are saying about MIDI Designer.

This new version brings greater maturity and stability along with new features for builders to work more efficiently during initial layout build and subsequent revisions of layouts.

Panel Grouping and Panel Channel — Panels can now be used to group controls. This behavior is optional. Panels can also be assigned a Channel and/or CC Offset for member controls, allowing users to build and modify pages and layouts quickly in a modular fashion.

Timing Rework — In addition, Snap to Value (and Snap to Default Value) have gotten reworked to allow for smaller timings and more frequent MIDI-value sends.

Dozens of issues — some notable, some minor — have been fixed in 2.9. See the Change Log for more information.

MIDI Designer Pro 2.9 is the 45th update of MIDI Designer since launch in 2012. MIDI Designer Author and Confusion Studios CEO Dan Rosenstark notes, “This release brings additional coherence and stability to an already mature platform that users trust and love. But it’s Panel Grouping and Panel Channel that are most exciting. Musicians, lighting users and others tweak and refine their layouts over months and even years. These panel features facilitate fast workflow and allow users to organize complex layouts easily. Let’s see what users do with it!”

The MIDI Designer Community provides a multitude of layouts for popular MIDI hardware and software targets. Those that have been rated by the MIDI Designer Team can be seen here.

Most MIDI Designer layouts are for iPad, and few have been ported to iPhone. Ibo Kai has broken this rule with his new layout for the Yamaha reface CS [ see all of Ibo Kai’s layouts ]

To avoid the complicated procedure for system settings in Reface CS (switch off, press + hold a certain key – remember which key to use for which function -, switch on again) I made this layout for quickly and easily changing things. Because they are all controllable via MIDI sysex! I can switch the internal speakers on and off, engage or disengage local control, change the pitch bend range etc. remotely from the iPad. Additionally I added two (green) buttons at the top for what I use most often: switching on both the internal speakers and local control, when I want to play Reface on its own, or switch both off, whenever I play it via my DAW.

This layout is based on Reface firmware 1.30, which introduced a number of new functions: for example in the looper you can now switch between the Guide Sound (currently set sound) or a Click Sound. Furthermore you can quantize your recordings to either 8th or 16th notes. Naturally if your firmware is older, you will not be able to control these, however the other controls should still work fine.

The second page is doubling the Reface onboard sliders for setting the sound. This is simple MIDI CC and I added it mainly for use when I want to record changes on the PC, while the synth is out of reach of my hands.

I made another version of the Reface CS editor for my iPhone. The layout is slightly different due to the small screen. Also I skipped the second page, the sound controls would´t really make sense in this size. Apart from that it´s all there, including the two additional buttons I made for quickly changing according to the playing situation: locally with local control and speakers on and playing via DAW, with local off and speakers off. Now I can use my iPhone for quick changes of system settings even when my iPad is away, busy with other things.

New York, NY – February 14, 2017 – Confusion Studios announced two new MIDI controller apps for iPad, both of which will be available for download from the Apple App Store on Wednesday, March 1, 2017: MDDX1 and MDDX2.

The Editor: MDDX1 by Helfried

MDDX1: Voice Editor for Yamaha Reface DX by Helfried Wildenhain highlights this user-author’s eye for design, a deep attention to detail, and a desire to push the underlying platform – MIDI Designer Pro 2 – to do new things. It allows for control of every parameter on the Reface DX and provides surprising new control vistas. The App extends the reface DX’s interface, providing a much-needed algorithms display, Master Tune, Transpose, Randomize and other new sections.

MDDX1 will run on any iPad with iOS 9.3 or better, and will be available on March 1, 2017 for download for $9.99. The app purchase may be applied towards a bundle purchase including MIDI Designer Pro 2.

MDDX2: Performance Tool for Reface DX by Ibo Kai is an additional, performance- focused interface for the Reface DX. As the author of the layout puts it, “This layout is pretty simple, just one page shows all the available functions. It is mainly what you find in the ‘FM’ keypad of the synth: frequencies, levels and feedback settings separately per operator plus the algorithm select.” In addition, Ibo Kai added an Amp Mode section. This auxiliary controller for the Reface DX is intended for live and studio performance, where a full-blown editor is not practical.

MDDX2 will run on any iPad with iOS 9.3 or better, and will be available on March 1, 2017 for download for $3.99. The app purchase may be applied towards a bundle purchase including MIDI Designer Pro 2.

MIDI Designer Author and Confusion Studios CEO Dan Rosenstark notes, “Both editors show the layout authors – Helfried and Ibo Kai – flexing design muscle and pushing the MIDI Designer platform to work in new ways. Each is a dedicated tool for working with the Reface DX and each provides a surprising and useful new interface for this small keyboard. Additionally, both provide new users with an entry point into the MIDI Designer platform at a low price.”

Anaheim, CA – Confusion Studios announced version 2.8 of MIDI Designer Pro 2 (MDP2) will be available for download from the Apple App Store for iOS on Wednesday, February 1, 2017.

Since MIDI Designer Pro launched in 2012, MIDI Designer users have been creating and sharing layouts to control other music-making apps on iPad. Side-by-side multitasking brings this experience to the next level, allowing users to see and manipulate a controller in MDP2 alongside MIDI-target apps.

Slide Over, Split View and Portrait

Slide Over: MDP2 v2.8 lets iPad users take advantage of Slide Over. While not every app can be slid-over app, Slide Over can work with all other iPad apps. With Slide Over, users can make changes to their MIDI Designer layout without leaving another app. Slide Over works on most iPads: iPad Pro, iPad Air and later, and iPad mini 2 and later.
Split View: Split View allows for true, shared-screen multitasking with MDP2 v2.8. New controllers will be possible for music-making apps that support this feature, including Infinite Looper, Frobulator, Metarecorder, VoiceRack, and Thumbjam. By combining multiple apps in one controller, users can view one app in Split View while controlling several others (including apps that do not yet support Split View). Beyond apps for music, it can be used with compatible apps for reading, writing and communicating. Split View works on newer iPads: iPad Pro, iPad Air 2, or iPad mini 4.
Portrait Mode: MDP2 v2.8 brings the powerful two-up page to a vertical orientation. This is especially useful for use in conjunction with apps that tend to be used in a portrait mode (like forScore) and physical spaces and stands where the iPad will not fit in landscape.
Pan and Zoom: This pair gives users greater flexibility in managing their screen real estate. Zoom lets users move between several magnification modes: fit width, original and fit half-width. Four-button pan provides scrolling, which is particularly useful where part of the view is obscured by the magnification level or side-by-side multitasking.

MIDI Designer Pro 2 will run on any iPad, iPhone or iPod touch running iOS 9.3 or later.

Lots and lots and lots of code changed in the upgrade to iOS 10 (Swift 3 and Xcode 8). See something, say something! Please report all bugs to wtf [at] mididesigner.com

We’re introducing a new Extra Features Pack feature In MIDI Designer 2.5 (coming in Fall, 2016): Display Zero. This feature allows you to specify an arbitrary starting place for the visual display of controls. 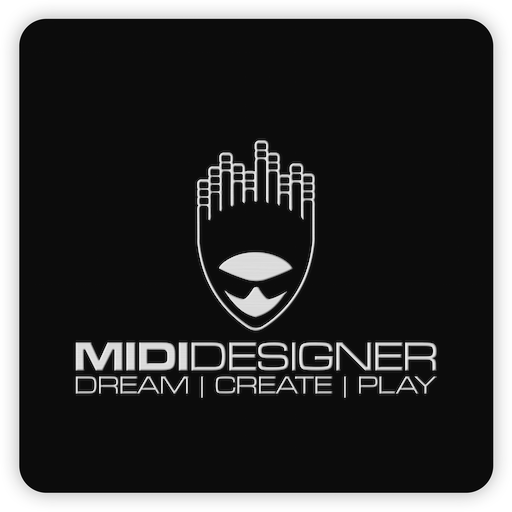